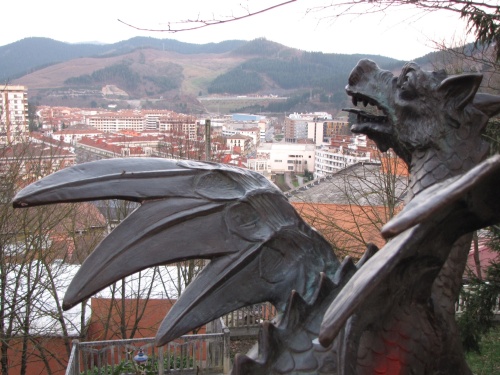 2012 was the year of the cooperative. It had been the local food co-ops of Minnesota I revisited while spending Christmas with my family that brought me back once again to reflect on what had brought me one year ago to Mondragón, Spain. Strong in the Midwest, the cooperative movement in the United States was partly thanks to the Finns who immigrated there in the mid-20th century. The sense of community that I experienced in the Basque Country, where the Mondragon cooperative movement was born, was the same that I had originally been attracted to when I first stepped into the Wedge Community Co-op, a natural food co-op in Uptown Minneapolis.

I was on a health food quest, busy interning at a recycling company that summer. I had gone vegetarian and was desperate to find a place where I could find the organic produce that I had read so much about that spring. A Muslim classmate from the local college mentioned it over a conversation since his wife worked there. It was the year we had ethics together, a year I kept asking myself what is right; the posters in the store entrance only made me feel more welcome. My supervisor at Eureka Recycling gave me a national guide to the food co-ops and we began stopping at local co-ops during family road trips across the country.  So sparked my interest in a cooperative movement that I soon discovered all around me as I moved to Finland and joined my family for the holidays f0ur years ago.

When Charles Dickens visited Lancashire in 1843 he saw much of what I had seen in the industrial north. Dickens was taken aback by the terrible conditions he saw in the midst of the wealth. In the bustling heartland of the Industrial Revolution he saw the two Englands of rich and poor. Speaking to an audience of aristocrats and mill owners Dickens asked them to take action with the workers to ”share a mutual duty and responsibility” to society. On the train back to London, impacted greatly by the poverty and misery he had seen, he conceptualized ”A Christmas Carol.”

At the time Dickens visited Manchester, a group of Bob Cratchits and their spouses were meeting regularly in the nearby town of Rochdale. One of the Pioneers, John Kershaw, made a key step in organizing the ”co-op”: a few days before Christmas 1843, a circular was issued calling a delegates’ meeting to be held. It took the mill workers almost two years before they had collected enough of their meager savings to open up their small co-op. Their immediate aim was to get better quality food at decent prices and give some of them jobs. From then on Christmas has never been the same.

Inspired by the Rochdale principles cooperatives began to spring up abroad. The 1840’s was a period of extreme famine and hardship in Europe, and cooperative responses emerged in other countries as well. By 1866, consumer cooperative ventures could be found in the United States. In Finland, Hannes Gebhard began the movement with the founding of the Pellervo Conferderation in 1899. When Finns began to immigrate to America, cooperatives offered them an alternative foundation for nationhood; in the Upper Midwest they managed to achieve a degree of cultural freedom and these co-ops were the very soil from which this uniquely Finnish-American society grew.

It was this culture of ’talkoot’, translated as community work, that ultimately brought me to Debagoeina, the high river valley of the Gipuzkoa province which is known for the world’s largest workers’ cooperative. The Mondragon Corporation is a federation of cooperatives based in the Basque region of Spain. It all began with Jose Maria Arizmendiarrieta, a young Catholic priest who found a town that had not yet recovered from the Spanish Civil War and began educating the locals about what he saw as a solution; a form of humanism based on solidarity and participation. In 1943, Arizmendiarrieta established a college that became a training ground for generations of managers, engineers and skilled labour for the cooperatives. This was the same town that I came to live in during my student exchange at Mondragon Unibersitatea.

During my five-month stay in the Deba river valley our class of exchange students met with Mikel Lezamiz from the Mondragon Corporation, responsible for sharing the Mondragon experiment with ’cooperative pilgrims’ like myself. I had first emailed Lezamiz to join in on a corporate tour but when I mentioned it to our Basque culture teacher she suggested we should all go. It was my teacher who told me about auzolan, Basque for ’neighborhood work’ (much like Finnish ’talkoot’.) It was then when I realized that this was the answer that had awaited me here.

During my first hike up in the mountains around Lake Urkulu I stepped on those same rocks that had given birth to the spirit of auzolan. We had driven up with my roommate Raul from down in the valley and as we walked he pointed out the little farm houses called basseris while his Basque shepherd Shiva barked at the sheep in the pasture. It was these very barrios in which the heat of July’s hay harvest brought neighbors together to give each other a helping hand. This was the same culture of collaboration that raised the province out of the depression caused by Franco’s assault on the Basque nation only 80 years ago. It was an experience shared by Finns becoming independent from Russia in 1917 and American immigrants following the lead of Upton Sinclair to defeat the effects of the Great Depression.

This sense for community was what the hike seemed to orient me towards. As we passed on the garden plots and little churches our walk closed in on Raul’s red van. That first moment together gave a lovely beginning to my stay in this foreign land. It was an act of community, a helping hand, a gesture of care towards one’s neighbor. They were the same principles written on a postcard titled ’How to Build Community’ pasted to the door of my apartment back in Oulu: Share what you have, garden together, sing together, seek to understand, know that no one is silent though many are not heard, work to change this.

It was later that I met Inigo from the Lanki Cooperative Institute through my professor of Basque culture. He plays an integral part in researching cooperative movements and how their lessons can be implemented to teach the youth to do the same by bringing out social change in the community. One of their projects is called Bagara, ’we are’ in Basque. Based in Aretxabaleta, the neighboring town of Mondragon, the association meets weekly to discuss topics ranging from youth housing to sustainability. Only a year ago they had had two Brits bike down from Totnes to share their insights on Transition Towns, a grassroots network of communities that are working to build resilience in response to economic instability.

As we leaned against the cafeteria counter to exchange our last greetings before my return to Finland, Inigo and I discussed my coming military service and how it all tied into my past interest in the Zapatistas. Years ago he had participated in civil disobedience when Spain was still conscripting young men into their military. To me it was a personal journey in the spiral of violence and at the same time, a service to my own community. Now as I look back at the road where this spirit of ’neighborhood work’ has brought me, I am humbled to serve as a medic corporal in Sodankylä. For it was the talkoot on the Estelle sailing ship and the injustice I felt when our comrade Jyri Jaakkola died that ultimately brought me here. After all he had been working for the same ideas that Arrizmendiarreta had preached seventy years ago: solidarity and community participation.

Only three years ago we had met at Kasvisravintola Keidas, a restaurant boat on Turku’s Aura River, to come up with a brand for coffee that we would begin importing to Finland from a small coffee cooperative in Chiapas. The name, Cafe Caracol, came from the self-governing communities of the Zapatista movement and meant ’snail’ in Spanish. Through this trade we would support the people that sought autonomy for the indigenous communities of Southern Mexico and it was during a human rights caravan to one such community, San Juan Copala, that Jyri was shot dead along with Alberta Cariño, a long time advocate for food sovereignty, community water management, soil conservation and the right to autonomy for indigenous peoples in Oaxaca.

Jyri’s picture reminds me of this when I open my daily organizer that I carry in the thigh pocket of my military fatigues. It reminds me of that warm summer evening when we were biking to go dumpster diving with my friends Anita and Svante and I first heard that he had been shot. A hike in the Basque mountains and hours of standing in stance meditating to the sound of the wind blowing through the trees in front of our barracks. This is the spirit of auzolan – teaching the new recruits how to apply a tourniquet – the same spirit that could have saved Jyri’s life. This is an honor and it all began with that sense of sharedness I felt when I stepped into the Wedge Community Co-op that one afternoon. It is the quest I still share with those who seek this ”new Jerusalem” over the ”satanic mills” of yesterday.

And I saw a new heaven and a new earth: for the first heaven and the first earth were passed away; and there was no more sea. A 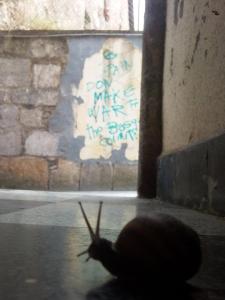 nd I John saw the holy city, new Jerusalem, coming down from God out of heaven, prepared as a bride adorned for her husband. And I heard a great voice out of heaven, saying, Behold, the tabernacle of God is with men, and he will dwell with them, and they shall be his people, and God himself shall be with them, and be their God. And God shall wipe away all tears from their eyes; and there shall be no more death, neither sorrow, nor crying, neither shall there be any more pain: for the former things are passed away. (Rev. xxi)

The Night the Lights Were Lit – David J. Thompson
http://www.wedge.coop/history/rochdale-story-lights

In Business: All Together Now
http://www.bbc.co.uk/iplayer/episode/b0196tn9/In_Business_All_Together_Now/

In Transition 2.0: a story of resilience and hope in extraordinary times
http://www.intransitionmovie.com/fi/